Due to our commitment to present you the website which is phenomenal in every aspect, we have to delay it for few days.
We really regret for your inconvenience, value your sentiments and appreciate your wait.

The game Modern Snakes & Ladders is centuries’ old. This game board contains one hundred squares. There are 10 rows and 10 squares altogether. The goal of this game is to be the first player to reach square 100.
In these squares, both ladders and snakes get scattered. Ladders provide free ride to levels higher, while snakes bring the players lower in squares, resulting into lower position in game. If any player’s dice reach at the head of the snake, the player tumbles down the snake’s body to the lower level.

No doubt, this game helps its players understand the addition, subtraction and logic of a game. But, this game has evolved much, thanks to the onerous effort and R&D by the companies dealing with the kids’ products. Therefore, this game is known as Modern Snake & Ladders 2.0. 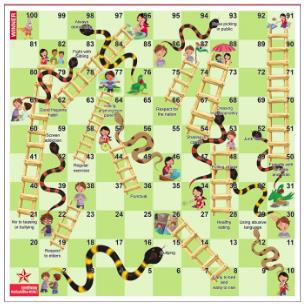 There are several benefits of this game. Some of these are given below:

This is important to note here that the above-given benefits include but not limited to the benefits of Modern snake & Ladder 2.0.